What is a non-linear innovation process?

A linear process has never led to innovation success. A step-by-step thinking process would limit the brain’s capacity, so complex thoughts can’t be composed. Squeezing Innovation into a step-by-step process is like asking a football players to follow a process where every move is programmed and if the other player moves they can lookup a table to find how their next move should be.

Innovation teams can handle an idea relevant to the future or outside the current steps by accessing any part of the innovation journey at any time. That may be a bit disturbing for people who are used to focusing on the here and now and may get confused when others work in other spaces of a project. If necessary, they can also add content in past episodes that may force a team to go back and revisit everything they have done so far. That may be a bit painful right now – but nothing compared to failing and starting from scratch later on.

The second non-linear process can influence the future by reaching out to a part of a process that may come a year later.

The chart shows the principle without going into too much detail. During each episode of the innovation process, summaries from past episodes need to be reviewed to ensure everything that was built and based on even previous decisions are still in line with what is done in the current episode. Any divergence from the original direction need to be discussed. Also, advice for future episodes needs to be given. Innovation teams can handle lateral thinking by using an intelligent system that manages the administration of past and future activities. 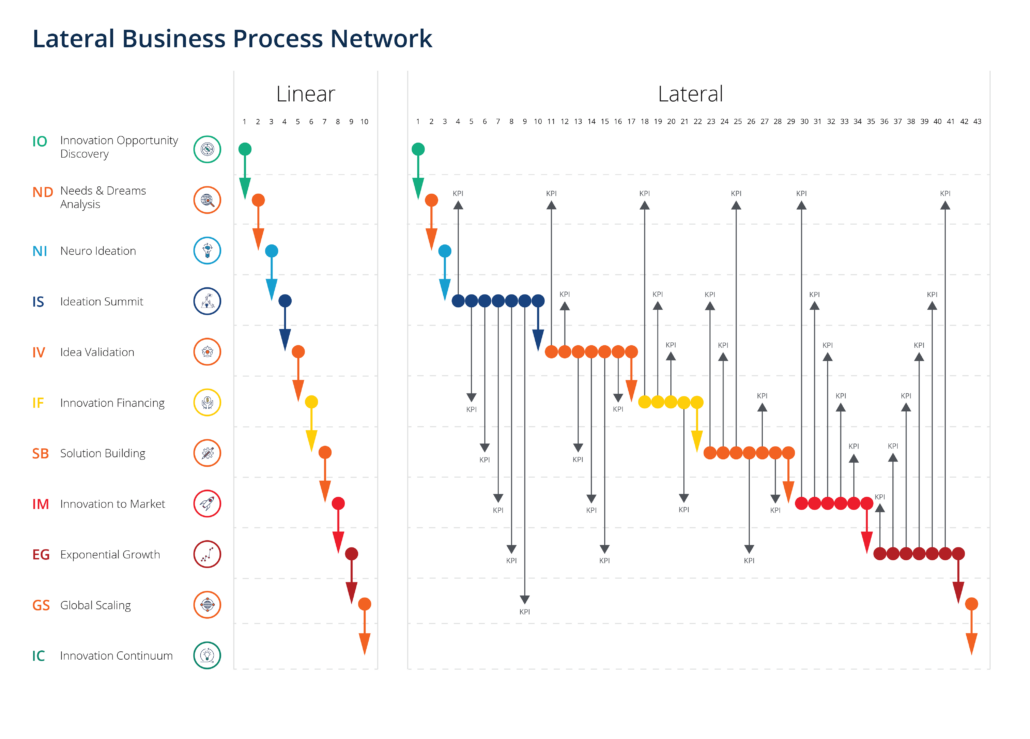 Our innovative mind works laterally, our repetitive mind works linearly. Due to its simplicity, we explain, learn and effectively do all our repetitive jobs in a linear, step-by-step model. Learn and repeat. All project management systems leverage that model and guide us step-by-step through a process, manages resources and timelines to successful completion. Everything creative however can’t be done in that way. Innovation is only one of it, Emergency situation management, creating a new marketing campaign, composing a new song, and so forth, can’t be created linearly – no matter how hard we try to squeeze it in. We decide not even try to squeeze innovation into linear structures but follow the natural flow of our brain in a lateral manner. After successfully building the neuro ideation model with laterally organized canvases, we applied the model across all creative processes. We don’t religiously push the lateral mode but using only where it makes sense and use linear where it is better. Ideation is lateral, the entire innovation journey map is, or looks like linear, but is formed in a way that lateral jumps are easy to do. Yet that map is at best a hybrid but mainly linear. The effects are best seen when trying it rather than reading about it. We may be able to explain it verbally, the day we can explain how a piano sounds. :)